I Figured Out Why It’s Called Red Dead Redemption

So there I was, having just shot and killed half the Walton gang, busting through the flimsy doors of their desert hideout – about to rescue a rancher’s daughter from the loneliness of rapists and outlaws. I burst in like hell with legs, and see there’s still one man standing over her with a gun to her head. I waste a split-second aiming. Crack. Too slow. She’s dead. In rushes the father to cry by the side of his dead daughter, and for some reason I lose 200 honour points as if I shot her myself. I feel gutted. John Marston failed.

Then, about an hour later, I ride through the same bit of country and find that this grim show is staged again, just as it was before. This time I remember to use dead-eye, shoot the bastard, and (having already taken other jobs to get my honour back up where it was) I pick up an additional 200 points, and earn a new title and get a duster coat. And she lives. SCORE! John Marston rocks.

It’s got “redemption” in the title because you always get another chance. The clue is in your stats in the game menu: “World events encountered” then “Unique World Events Encountered”. The game is letting you know there’s only so much it can provide, but it will keep giving you those moments time and time again if you know where to look. I went back to that fort at Twin Rocks because I knew there might be a chance to save that rancher’s daughter – it took me an hour to want to do it all again but a combination of my engagement with the situation, and Rockstar’s incredible work in creating an atmosphere in a game, left me suitably haunted by my failure to save that girl last time, and compelled to ride the bloodstained road to redemption. I would like to discuss how Red Dead Redemption manages to maintain the atmosphere and majesty of The West (though by flitting oddly through all its permutations), and somehow blend an action experience with RPG elements that in a weird way feels “arcade”.

It’s a testament to the elegance of the design that an open world game like this can support emergent game play, the narrative of the story, and still retain a very ludic feel regarding your actions (its like everything you do you are doing for all three reasons). I know people will tire of the comparisons, but to quickly mention GTA4 – your actions in that game outside the story had little or no impact overall. The situations that it could have worked in didn’t really exploit their setting in a game. The phone calls that led to your driving your friends around and hanging out with them could have but the reward/punishment for succeeding/failing in these things is detached from the core experience. They make up a stat buried away in the menu that no one cares about because the reward is limited anyway. Free taxi rides? Roman? Why am I not interested? The clue’s in the title. Grand Theft Auto 4 let the burden of these situations rest in your conscience – not your stats. Red Dead Redemption does both – your penalty/reward for your performance is in the same pile as for every quest/story mission for the whole game: money, fame & honour. Side quests they are in name, but they’re not marginalized by where they benefit you. 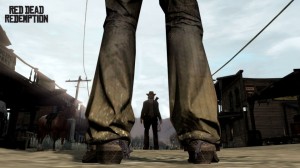 "Why Johnny Ringo, you look like someone just walked all over your grave."

The way RDR splits up its content is key in the way it makes you care about what you’re doing, and also in how the world remains believable in its own fridge logic. Story quests are supplemented by a handful of mini-games; jobs (nightwatching or horse breaking); challenges (hunting, sharp-shooting, botany *cough* I mean survivalisim, and treasure hunting); strangers (with unique mo-capped, story-like cutscenes) who make up the traditional side-quest side of things; bounty missions which can be taken voluntarily or as a means of penance for your legal indiscretions; and finally, my favourites, the “random encounters”. When I say that, I am not simply referring to them in the strict RPG sense that they are an enemy, but much more curiously in the sense that they are occurrences that happened that for some reason keep repeating themselves in roughly the same place. They have little or no exposition, and are characteristically over in a few moments. Despite the story (which I’m enjoying, and I think has sturdy characterisation and the usual hallmarks of a Rockstar Game) my main emotional engagement with Red Dead is in these vignettes, these momentary shots of simulated spontaneity. They contribute to a whole world where the joy comes from it being a bit like the movie Groundhog Day – somehow a story and a narrative continue while the world repeats itself.

My obsession with the random encounters began in Armadillo – the first proper town you encounter in the game. Now so far in town I have had several encounters including being propositioned to a few duels, catching a few horse rustlers, catching a thief stealing from the cordial racist shopkeeper, getting horse-jacked, and saving a woman from a pack of wolves. My two favourite encounters, the ones I hang around outside the saloon or on the roof of the coach-house for, are somewhat more wild: Firstly, the moment four horsemen ride through town shooting rifles into the air dragging a kidnapped woman behind them through the dirt screaming “This is our town!!”, and secondly, the one that started my craze, a prostitute being attacked by a spurned man wielding a knife outside the saloon.

They captured my imagination, because – like with the hideout at Twin Rocks – I failed to act as decisively as I’d have liked. The first I encountered was the prostitute being stabbed. I heard the scream, saw the blue on my minimap (though I was standing right there), and for some reason I dicked around with the weapon-selection wheel, and decided I’d use the knife – because in my head that was potentially less fatal (I can’t speculate as to why I didn’t just punch him). By the time I selected knife and got close to him she was already dead. I then fatally stabbed him right after. A few moments pass while I bathe in my inadequacy as a person, then I sigh and loot the attacker’s body, and pay my respects to the departed. It is only minutes until the next encounter signified by yet another terrorised scream of a damsel in distress. On this occasion I had the great misfortune of standing in the middle of the road, and for suffering “gamer’s ego”. What is going on? And how can I be DIRECTLY INVOLVED?! This was not a blue-mark on my minimap, this woman was just a woman apparently. People were running scared into buildings. Any sane man would have done the same, but I apparently decided that John Marston is not a sane man. No, in fact John Marston finally gets his act together (after being trampled underfoot) as the posse are almost out of town and shoots one of them in the back, causing them to turn around and charge back into town. Then in the confusion he shoots several lawmen and has to evade capture. Then, apparently, John Marston has a bit of a cry about how he’s lost honour and goes to pick flowers for half an hour to calm down.

I didn’t know these things would occur over and over yet. The reason I headed back into Armadillo was because I thought there must be more things like this that could happen. I was right, as I listed earlier more things were on the cards, and thankfully – without me expecting so, I got my chance to save the prostitute. Walking by the saloon I found her being wrestled to the ground in the alleyway. I saw the flash of steel from the attacker’s knife and thought “We’re not messing about this time!” pulled whatever gun I had holstered (thankfully not a shotgun) and plugged him in the head. His knife flies from his grasp and lands a few feet away, harmlessly laying in a puddle. Then I am offered the thanks of the woman I saved, and she even gives me money. John Marston – you can be my hero baby.

It would take a few more attempts before the bandits dragging that woman would be stopped – primarily because I spent two encounters trying to shoot the rope like some hotshot. Eventually, from the balcony of the saloon, and once again by chance, I had the opportunity to swiftly kill them with my rifle. I was given thanks and honour. John Marston – doesn’t like women being dragged. 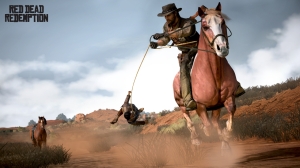 The reason these random encounters are much better than simply an enemy appearing is because you choose to get involved in them. They begin a story and let you apply narrative, and as many people have already been discussing, Red Dead Redemption is a game that makes great stories for gamers. In the last three paragraphs I told four stories of what I did in Red Dead, and each scenario offers dozens more variations on them. The shopkeeper’s thief for example – I killed him once. Then one time I hogtied him, and brought him back to the shopkeeper who started kicking him in the head. Then one time the shopkeeper said something racist before I could give him the prisoner, so I punched him in the head and chased him around town and hogtied him, freeing the robber. I got done on one account of abduction but sod it, it was worth it. Besides, the shopkeeper holds no grudges apparently.

So to restate my main point, Red Dead Redemption takes Rockstar’s emergent gameplay formula one step further by offering the player two things: One – the opportunity to make right our mistakes by letting us re-enact them (I would argue against it being a counter to engagement, as to play along you have to be immersed in their iteration of The West and drop your own preconceptions), and by increasing our own narrative experience of their emergent game play tools or props by granting them context – that is to say, offering us small “situations” – like the racist shop-keep’s thief – in the world rather than static things the GTA games use like stunt ramps. You may get a good crash off a stunt ramp, but you won’t get half as good a story of how you interacted with it as you will with the thief.

John Marston like’s Pina Colada, and getting caught in the rain.

Post Script: The “Red Dead” bit is because when it goes red you’re dead. I guess.

RSS Feed
This entry was posted in Editorials and tagged Red Dead Redemption, Rockstar. Bookmark the permalink. Post a comment or leave a trackback: Trackback URL.